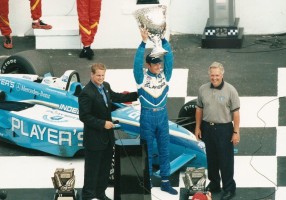 Pete started working in motorsports in 1988 at a Grass Roots level in the Maintenance Department at Michigan International Speedway.  After completing his education at Hillsdale College and completing a two-year internship with Penske Motorsports he was offered a full time position in 1992 working in Operations, here he gained the true appreciation of various roles behind a successful Speedway Operation.  As much as he enjoyed this side of the business, he wanted to be in Sales and this led him to Selling everything from Program Advertising to Hospitality at Nazareth Speedway, the Cleveland Grand Prix and MIS.

In 1998 he accepted the Director of Sales position, one that he enjoyed and thrived in until he was offered the Executive Vice President and General Manager at Chicago Motor Speedway in Spring of 2000.  A position that he worked tirelessly at, unfortunately through the demise of CART and a new NASCAR facility being built nearby, CMS was forced to close.  As this door closed a new one opened as Pete was then called on to work for Dale Earnhardt, Inc. managing and growing a sponsorship base to well over $60M in Sales for a four car effort.

After 2 years working at DEI, it became clear that his trade was more valuable in the Agency space by working with a client that was engaged in opportunities at DEI.  This all led to the vision of launching iNERTiA Sports and in September of 2009 it became reality.  Each of these roles and experiences has allowed Pete to share a wealth of knowledge and guidance for his clients in all facets of motorsports wether its B2B or introducing and aligning new partnerships within the industry.  Pete recognizes that navigating the motorsports industry is very different than how the traditional sports operate and he is excited about helping those that wish to learn more!

For answers to your questions or to schedule an appointment, please drop us a note:

Send us an email.

"There are Only 3 True Sports - Racing, Bull Riding and Mountain Climbing, everything else is just a Game!"